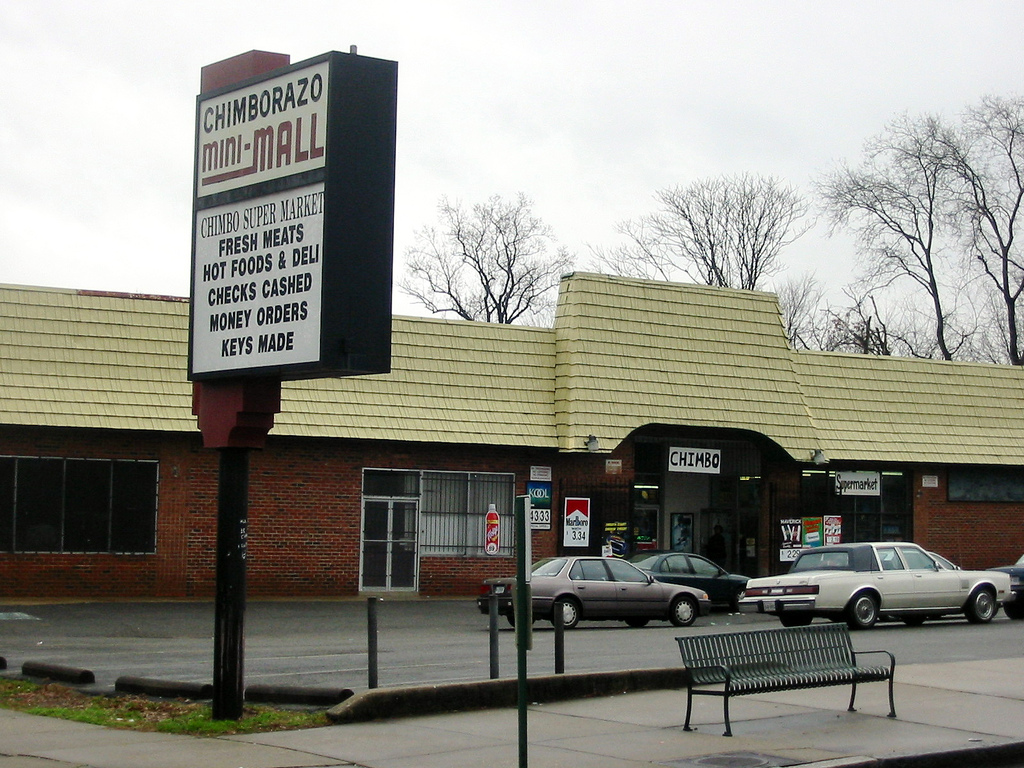 A brief history of the Chimborazo Mini-Mall

The Model Cities Program, an element of Lyndon Johnson’s Great Society and War on Poverty, was a federal urban aid program in the late 1960s and early 1970s intended “to make a blighted section […] a pleasant place to live”. In Richmond, this manifested as the Church Hill Model Neighborhood Program, whose most lasting contribution to the neighborhood might just be the Chimborazo Mini-Mall.

Wikipedia provides an overview of the program:

Authorized November 3, 1966 by the Demonstration Cities and Metropolitan Development Act of 1966, the program ended in 1974. Model Cities originated in response to several concerns of the mid-1960s. Widespread urban violence, disillusionment with existing urban renewal programs, and bureaucratic difficulties in the first years of the War on Poverty led to calls for reform of federal programs. The Model Cities initiative created a new program at the Department of Housing and Urban Development (HUD) intended to improve coordination of existing urban programs and to provide additional funds for local plans. […] The program’s initial goals emphasized comprehensive planning, involving not just rebuilding but also rehabilitation, social service delivery, and citizen participation.

Church Hill at this time was a prime candidate for just such a program. The population of Church Hill had fallen from a one-time high of over 30,000 to just over half of that. A 1971 Washington Afro-American article says that 49.9% of the families in the Church Hill Model Neighborhood area earned less than $3,000/year and that 55% of the residents over age 25 had less than 8 years of schooling. The area also had “at least double the city’s overall [unemployment rate], low household income, and basic poverty of an almost rural character”. Growth of the large-scale public housing developments at Mosby Court and Fairfield Court had continued through 1970, and the many of the houses in the surrounding areas were “rundown and below the city housing standards”: Bishop Williams, a prominent community leader, said, “We want a return of the middle-income home owners”.

Richmond received an early planning grant of $169,000 in 1968 “to map a comprehensive attack on physical and social problems in the Church Hill Model Neighborhood Area”. After this planning, the city applied for and won a $3.3 million grant from the U.S.Department of Housing and Urban Development to be “supplemented by extensive state, city and private involvement” to improve education, housing, and income in the Church Hill Model Neighborhood Area.

Goals of the program were broad and involved fixing the dilapidated structures in the area, increasing the educational achievements of the residents, and improving the income levels in the area. One specific goal was to reduce the amount of dilapidated housing from 23% to the [unstated] citywide average within 7 years through a program of new construction and rehabilitation. It was anticipated that this would involve 700 to 1,000 units over the 7 year period of the program. The program was also intended, perhaps dissonantly, to both “increase the range of [social] services available in the neighborhood and to decrease the dependency on welfare of residents to the city-wide average”.

The Church Hill Model Neighborhood program was community-based, working in association with the city planning department. Members were chosen by citizens of the area, and a multitude of study committees were established. More than 30 special meetings were held with more than 2,300 persons attending.

By August 1972, the Model Neighborhood Planning and Zoning Committee and city planning staff were ready to unveil their plans for the rehabilitation for the neighborhood. The committee suggested a vision for Church Hill: “a central area civic center, neighborhood and central shopping areas, increased park space, street improvement, pedestrian malls”, the development of a community college along Tobacco Row, and rezoning to allow high rise apartments for the elderly near parks and the community center.

Specific details from the plan are a mix of suggestions that ring wonderful and horrifying 38 years later. The plan called for support of the “‘mom and pop’ type neighborhood-related businesses” in the existing store-fronts at Fairmount and Mechanicsville, 29th and P, Oakwood and P, Marshall and Chimborazo, 25th and Marshall, and 19th-21st and Broad. The plan also called for “one large modern shopping center complex between P and Carrington Streets around 25th Street”.

The proposal called for cobble-stoned Carrington Street to be widened into “a super boulevard” coming off of the MLK Bridge through to 25th Street. At the same time, several streets were singled out to be converted into mall streets for pedestrian and bicycle traffic: 29th from Clay to R Street, 30th from Chimborazo Park to Marshall, and N from 30th to 35th. Another change asked for was the closing of Bellevue School, Bowler School, and the old Chimborazo School, and for 2 new schools to be built: one at 24th and Jefferson, and another at 28 and S. 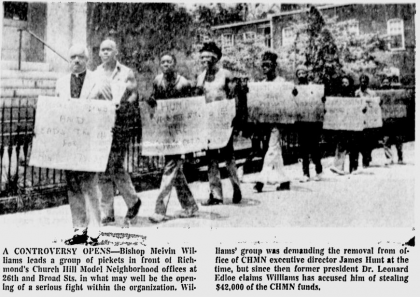 The community-based organization soon fell prey to internal conflict. By June of 1973, members of the board were speaking publicly of issues between them and there were protests at the board headquarters at 26th and Broad Streets. A July 1973 article in the Washington Afro-American details how Bishop Melvin Williams was ousted from his position as board chairman, after it was said that he had accused another of the committee members of stealing $42,000 in organization funds following public friction between Williams and other members of the committee.

By the end of 1974, the program was being looked into by the local police. An October 1975 piece in the Free Lance-Star says that a special grand jury was being put in place to probe the program, after an 11 month look by the local police had failed to make headway. The Commonwealth’s Attorney Davis said at the time that the Church Hill Model Neighborhood Program “tends to promote criminal activity”. A later article reports that the special Circuit Court grand jury said that 3 city official who managed the “now-defunct model neighborhood program […] should be cited for misfesance in office” and that city council should share blame “for failure of various projects in the program”.

Other than amounts of dollars and the names of the people who were leaders in the organization, no real specific details are showing up. I haven’t been able to find a description of the accomplishments or failures of the program. If anyone can flesh these out, please share. I’d also love to see a map of what was considered the area of study.

The federal program is described as having “ultimately [fallen] short of its goals”. The same could politely be said for the local implementation. The Church Hill Model Neighborhood Program received $10 million in public funds over a 6 year period, and it is unclear what was accomplished. A 1996 editorial in the Richmond Times-Dispatch quotes Doug Wilder as saying:

“We have seen over the past 30 years many stop-gap measures enacted or implemented to address the deterioration of our nation’s cities, but we have watched, almost powerless, as the problems escalate — and the cities deteriorated even as model neighborhood programs across the nation were established. If Richmond is any example of the results, we can see that they have been disastrous. ”

I was, though, able to discover one lasting addition to the area via the Church Hill Model Neighborhood Program… 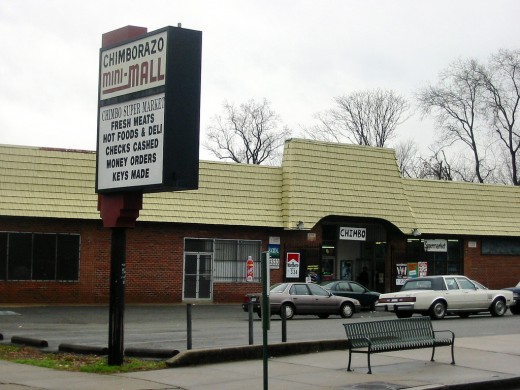 In September 1973, ground was broken for the eventual construction of the Chimborazo Mini-Mall. The Greater Richmond Development Company (GRDC), “an outgrowth of the Economic Development Study Committee of the Church Hill Model Neighborhood Program”, was a private corporation whose stated purpose was to strengthen and expand small business by providing adequate facilities. The development of the 44,000 square foot building to house “a laundromat and cleaners, supermarket, drug store, beauty parlor, and restaurant” was the GRDC’s first project. The article also stated that the “GRDC is also planning to build a small broom manufacturing plant at 214 and 216 N. 21st Street”.