The urban scale of Richmond

The newish Urban Scale Richmond is an erudite collaborative look at our city:

In the past the city grew according to an organic pattern. “Urban scale” describes a hierarchy of urban elements and how they organize the city as a whole. […] Richmond, Virginia, in its complexity and historical unconsciousness, keys to both its brightest successes and most egregious failures, can benefit from a little archaeology. 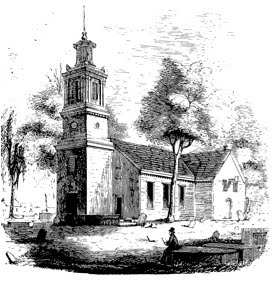 Publishing since November 2009, Urban Scale Richmond has already twice looked at St.John’s Church. December’s The Search for Architectural Unity at the Church on Richmond Hill traces the achitectural history of St.John’s and the pressures upon it over the years:

The architectural and liturgical world in which the church was built was slow to change and deeply rooted in local tradition. Beginning in the nineteenth century, however, the context of Anglican worship and of architectural theory became a source of tension within the diocese and parish as the church’s understanding of its role in the community altered. The church’s authority as arbiter of the city’s spiritual life required careful maintenance of its position in the vital urban order. New churches, such as Monumental Episcopal Church of 1814, challenged its position in the diocese as the principal church of the parish, at the same time that the Neo-classical building of Monumental Church and buildings serving other denominations, such as the Gothic Revival Second Presbyterian Church, challenged the “plain and neat” traditional form of the surviving colonial buildings.

January’s The Richmond Church gives an early history of St.John’s, with fascinating details:

A drawing from the 1780s shows the county jail and the boundaries beyond which prisoners were not permitted to pass. A narrow path followed what must be a footpath up the hill diagonally to the church so that debtors and other prisoners could attend the services. The surrounding churchyard provided the town with a central place for burials. Often difficult of access from below, the church was, however, located on the side of a major road leading to the northeast, now know as Nine Mile Road.

They have also opined on Henrico as well.