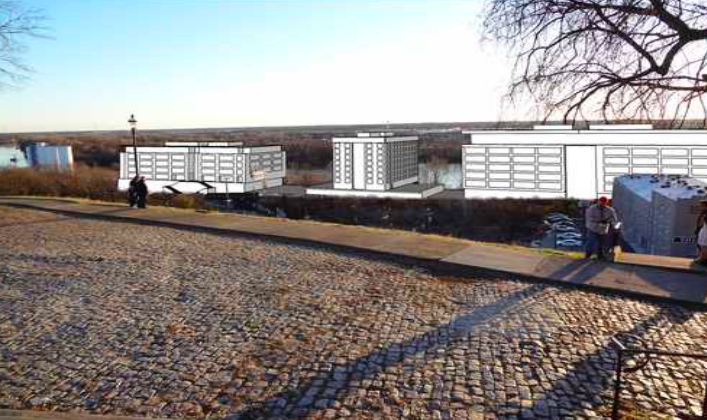 Echo Harbor, also known as “Richmond on the James,” popped up again on March 23rd at City Council. CHPN posted a short notice about a City Council agenda item to approve an agreement between the City and the landowner to move the City’s combined sewer overflow pipe from the center of the property to the waterfront. However, many of you may have wondered about its significance.

The RTD reported on the debate that ensued at Council that evening:

The Council also voted 8-1 Monday to allow the developer behind the planned Echo Harbour project on the James River to relocate a combined sewer overflow pipe to make the site more favorable for the planned high-rise buildings, which would consist mostly of office space with some retail and restaurant space. The developer will move the pipe at its own cost.

A group of Church Hill residents and preservationists asked the Council to delay voting on the relocation of the pipe. The opponents suggested it was impossible to build on top of the pipe and that by agreeing to move it, the Council would be choosing development that could jeopardize river views over preservation.

A representative of the developer, USP Echo Harbour LLC, characterized it as a routine request to relocate a public utility on private property, adding that moving the pipe closer to the river would allow the inclusion of a linear park along the riverfront rather than having the buildings pressed tight against the water’s edge.

Members of 180RVA, which includes statewide organizations Scenic Virginia and Preservation Virginia in partnership with Church Hill residents, met with Councilwoman Newbille a number of times seeking a continuance so that they, along with national conservation groups, could negotiate with the developer and raise the funds necessary to purchase the land for a park as called for in the 2009 Downtown Plan. The day of the hearing, they learned that the Councilwoman would not be requesting a continuance. By then it was too late to inform the other Council members about the significance of the ordinance, and as is frequently the custom, the Council members deferred to their colleague representing the district.

A number of provisions in the Downtown Plan speak of the importance of protecting riverfront parkland and key views, including The View That Named Richmond. The Downtown Plan references this parcel several times, including a specific recommendation in Section 4, p. 4-47, to purchase it for parkland:

Acquire unique properties for open space along the river that:

The City should actively work to acquire properties for public open space along the river. As the revitalization of Downtown continues, and as more people begin living and working in the area, the need for open space will swell and new signature spaces along the river will need to be made available to all. Now is the time to realize that key properties are limited in number and for the City to actively pursue the purchase of these properties. Properties to acquire include those with historic, scenic, wildlife, or recreational values, among others. In particular, the former Tarmac property parcel and the Lehigh Cement Factory on the north side of the river and Mayo Island in the center of the river should be purchased. The City should purchase the properties at fair market value and negotiations with these various property owners should begin as soon as possible. (emphasis added)

We are frustrated that instead of working to preserve the land and the panoramic view as called for in the Downtown Plan, the City has spent months negotiating with the developer to have the City’s Combined Sewer Overflow pipes moved in order to facilitate development of the parcel. At the same time, why spend City money to remove the Lehigh Cement towers from the panoramic view, only to add a line of buildings of equal height and much greater density? In addition, the City is investing $8 million into the Stone Brewing Bistro at Intermediate Terminal. Why on earth would we encourage inappropriately tall development to the west that will certainly obscure the views of historic Tobacco Row and much of Downtown for Stone’s patrons?

Undaunted, we will continue to seek negotiations with the developer and to raise the funds necessary to purchase the parcel and preserve the historic and panoramic views from Libby Hill Park and to enhance the parkland along the riverfront. We hope you will share your thoughts on the view and the goal of preserving the land as a park.

For more information, or if you have questions, please contact: