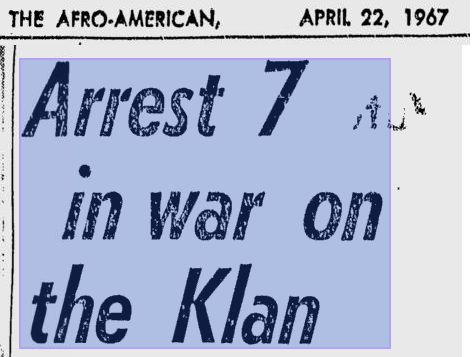 That Christmas that the KKK burned a cross at Chimborazo Park

History Replays Today‘s #OTDinRVA for yesterday was kind of shocking:

I went looking onto the online newspaper archives to see if I could find out more, but could’t find anything about it. I did stumble across another cross burning story equally as surprising to me:

Slater seems to have been the main instigator. The arrests followed a raid on his garage where police found “shotguns, pistols, back powder, dynamite fuse wire, four crosses, lumber, and burlap.” He was also charged with damaging the building of the Richmond Afro American newspaper.

The all-white jury at Slater’s first trial deadlocked, and a mistrial was declared after 3 1/2 hours. His second jury also featured an all-white jury after the 6 potential black jurors (of 20) were stricken from the pool. I can’t find anywhere the outcome of his 2nd trial… Anyone out there have a better resource?