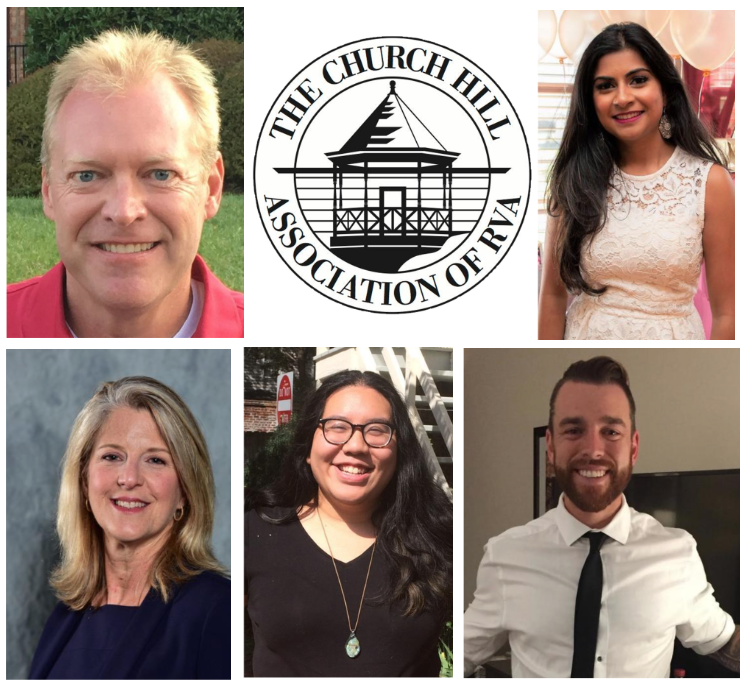 From Amy on Church Hill Nextdoor:

Church Hill Association to put forth slate for new Board

The Church Hill Association will host its September meeting this week, and the Nominating Committee will put forth our proposed slate of new members for our current open positions on the Board at that meeting (TUESDAY 7pm, St. John’s Parish Hall).

Please consider coming to the meeting. Anyone who joins the Association (you can join online at churchhill.org) at least 24 hours in advance of the meeting is able to vote and to nominate candidates for the Board from the floor.

The bios of our proposed slate will be published in the October newsletter. I am also cutting and pasting them below.

Debra Melisi is particularly invested in improving public education opportunities in the community, viewshed preservation, and increasing Association engagement with residents of greater Church Hill. Debra has been a resident of St. John’s Historic District for two years. She volunteers as a tutor and fundraiser for Church Hill Activities and Tutoring (CHAT), as Vice Treasurer for the Richmond Academy of Medicine Alliance (RAMA) and as a Board member and Committee Chair for the Richmond Academy of Medicine Alliance Foundation (RAMAF). She also serves as a Legal Nurse Consultant, and a Managing Partner and Healthcare Consultant for PARC Consulting LLC in Northport, New York. A wife, mother and grandmother, Debra is originally from New York, and has previously studied, worked and lived in Florida, New Mexico, Maryland, Washington D.C., and throughout the Commonwealth.

While preparing for graduate school exams, Audrey Auyeung works as a private English teacher electronically for students in China, and as a brand ambassador for a start-up. She is a first-generation Asian American, Church Hill homeowner, former area renter, and VCU engineering alumna. Audrey was the first member of her family to graduate from college, where she helped to found the Omincon Delta Kappa Chapter at VCU. She served as ODK’s Secretary, and as a board member and Student Leader for the VCU Alumni Association. Originally from Chicago, Audrey has also studied and lived abroad in Germany, and in neighborhoods throughout the city. She cares particularly about opportunities around diversity and inclusion and education, and she looks forward to getting to know more people in the community, connecting the Association to more residents, and enhancing the Association’s evolving digital presence while serving as Assistant Secretary.

Steven Keener is faculty member at Christopher Newport University and has taught courses at Virginia Union and VCU. Originally from Clifton Forge, Virginia, Steven recently earned his Ph.D. in Public Policy from VCU’s Public Policy and Administration program, and owns a home in Chimborazo with his partner Emily and husky Covey. Steven believes that civic neighborhood organizations can serve a unique and important role in a city’s growth and wants to do all he can — whether improving public education opportunities, increasing diversity and inclusion, working with local nonprofits, or supporting local businesses — to help the association understand and embrace its role in making Church Hill a wonderful neighborhood for all its current and future residents. Steven has previously worked as a Research Analyst for the Virginia Department of Criminal Justice Services (DCJS), and as a research assistant, consultant and coordinator for various entities including KidSafe, a nonprofit committed to preventing child sexual abuse. Steven received the Excellence in Virginia Government Award in 2015.

Reshma Gola is a Business Project Manager at Veracity Consulting Group, a startup healthcare consulting firm. Originally from Richmond, Reshma holds a Masters degree in Health and Medical Policy (with a concentration in Global Medical Policy) from George Mason University’s Schar School of Public Policy, and a Bachelor of Science in Public Health from James Madison University. Reshma previously participated in the Events and Sponsorship Committee on the Leadership Council for the American India Foundation D.C. Chapter and established the Alexandra Healthy Workplace Awards Program which encourages and rewards local businesses that implement policies that will support their employees in living a healthier and balanced lifestyle under the Partnership for a Healthier Alexandria. Reshma recently purchased a home in Union Hill with her husband who is a radiologist at VCU, where he earned both his undergraduate and graduate degrees. Reshma particularly cares about promoting diversity, improving public education, and supporting local businesses around the Church Hill area.

Brian Loos proposed to his wife Stacey four years ago in Libby Hill Park. They now live together in a historic 1885 house on East Grace Street, and have been actively involved in the community for the past two years. Brian and his wife opened their home for the Church Hill Association’s Historic House Tour, Brian and his daughter mulched the parks in advance of the UCI International Bike Race, he served beer for Hogtober Fest, and he has volunteered on the Association’s Transportation Committee. Brian has been employed by Altria in Richmond for the past 14 years and currently works in the Procurement organization where he is responsible for capital expenditures for buildings and equipment as well as supporting the commercialization of new products. Brian is past President of the Richmond chapter of the Institute for Supply Management, a Certified Purchasing Manager and he received his MBA from the University of North Carolina in Chapel Hill. Brian has two daughters and has coached their basketball, soccer, and volleyball teams. He also serves as a youth leader in his church. Brian would now like to apply his skills and energy to increase and diversify the Association’s membership base, encouraging methods “outside the box.”