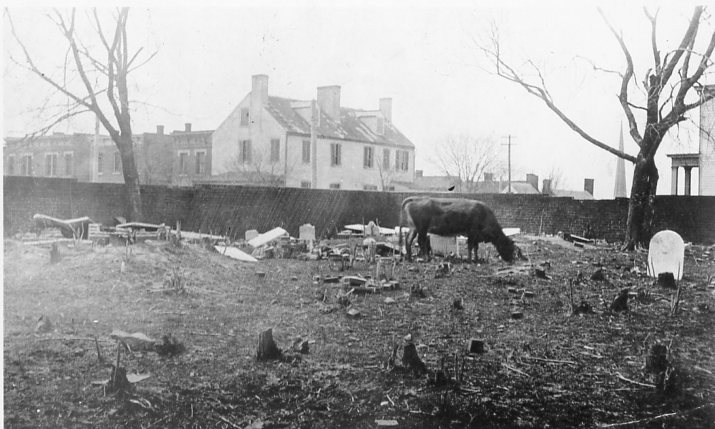 The Lost Cemetery of Church Hill

VIEW LARGER (courtesy of The Valentine)

The area that is now Church Hill was once dominated by the Adams family, led by its patriarch, Col. Richard Adams (1726-1800). Adams served in the House of Burgesses, the House of Delegates, the Virginia Senate and the Convention of 1776. He and his wife Elizabeth Griffin were the parents of eleven children, almost all of whom stayed on Church Hill as adults and built houses on Adams’ extensive land. Several of the children married into prominent Virginia families and went on to political careers of their own, including Dr. Samuel Griffin Adams, a mayor of Richmond, who also served in the Virginia Assembly.

Adams’ first house in Richmond likely stood on the north side of East Grace Street between 22nd and 23rd streets, with a later house built on the lots now occupied by Richmond Hill.

A notable building still extant that is known to be associated with Adams is the Ann Carrington House, built circa 1810 by Adams’ daughter Ann Adams Carrington and known for its unusual, bow-front façade. 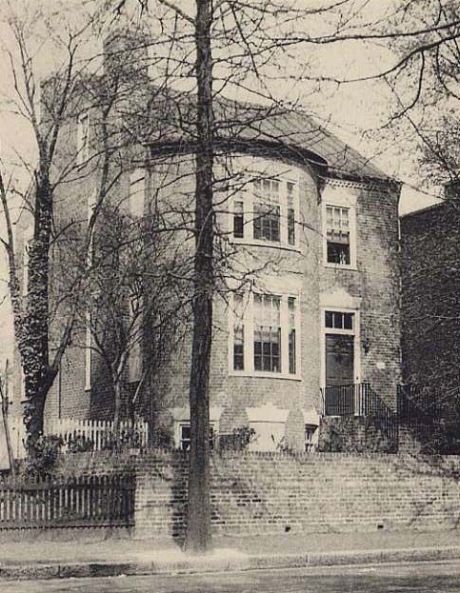 It would be natural to assume that Adams and his numerous children, grandchildren, nieces and nephews would have been laid to rest in St. John’s churchyard, but that was not the case. The Adams family had their own family cemetery, located on the north side of East Marshall Street between 23rd and 24th streets. Most of the Adams graves were clustered around the northeast corner of East Marshall and North 23rd streets.

The cemetery was to be used for Col. Adams’ direct heirs, his siblings, nieces, nephews, and their heirs. The graveyard, in fact, ended up the final resting place for dozens of Adamses and their relatives, including William Marshall (the brother of John Marshall and who was married to Col. Adams’ daughter Alice), and Col. Mayo Carrington, who was married to another daughter, Ann. 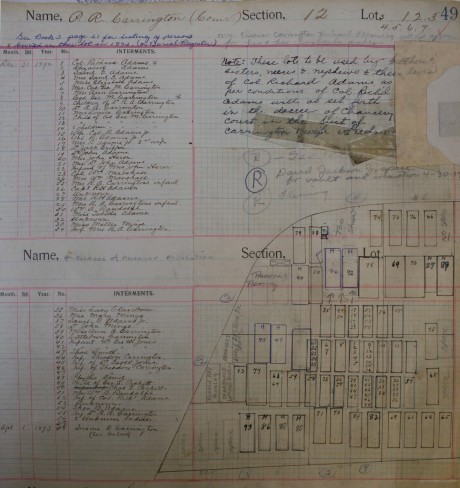 Next to the Adams Burial Ground, toward the center of the block, was the Pickett Burial Ground. This cemetery included the remains of Col. George E. Pickett (1752-1821) and his wife Margaret Sanderson (the grandparents of Confederate general George E. Pickett), as well as about fourteen family members. Another single grave lay just next to the Pickett Cemetery, that of a Mrs. Shore.

Most of the Adamses and Picketts – and Mrs. Shore – lay undisturbed for several decades. In the late 19th century, though, development in Church Hill exploded. By 1876, houses had begun to encroach on the block itself, with three houses showing up on the northwest corner of 24th and Marshall in the Beers Atlas. 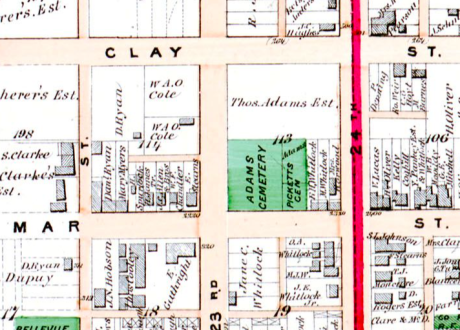 By the early 1890s, development made the real estate of the Adams and Pickett cemeteries too valuable to ignore, and beginning in 1892, Adams and his entire family were disinterred and removed to Hollywood Cemetery. Sadly for the Adams family, even though they helped to found Church Hill, they were not able to remain here.

The Hollywood Cemetery burial register states that in December 1892, “about 60” bodies that had been removed from the corner of 23rd and Marshall were reinterred. Most were identified in the Hollywood records, although more than a few were unidentified. Richard and Elizabeth Adams were reburied at Hollywood under a massive monument, surrounded by their descendants as they had been in Church Hill. Their neighbors in life and death, the Picketts, joined them at Hollywood Cemetery.

On the site of the former burial grounds, a row of brick, Second French Empire-influenced houses were built. 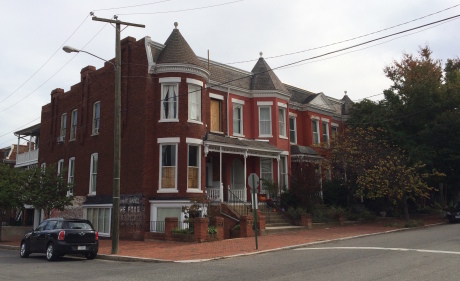