The Freedmen’s Bureau School at Chimborazo

Best known for being the Confederacy’s largest military hospital, Chimborazo Hospital actually began as an encampment for the Richmond Howitzers. During the early months of 1861, the Howitzers were joined by regiments from all over the Confederacy. The encampment also functioned as a prison for captured Union soldiers.

As the war progressed, however, Chimborazo’s purpose changed to that of a convalescent hospital. Approximately 75,000 Confederate soldiers were treated at Chimborazo. Chimborazo consisted of approximately one hundred and fifty small, hastily-constructed wooden buildings and one hundred tents. 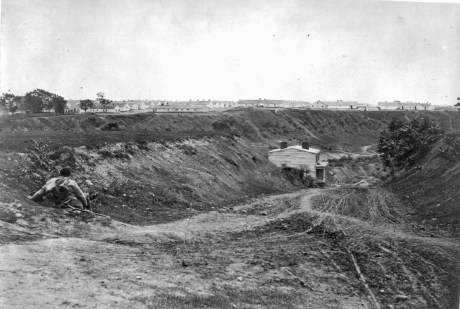 Severed from the Church Hill neighborhood by Bloody Run Creek, Chimborazo essentially functioned as its own village, complete with bath house, soap factory, morgues, herds of cattle and goats, and a bakery large enough to furnish 10,000 loaves of bread daily.

After the war officially ended, the hospital found yet another use. The Freedmen’s Bureau took command, using the former barracks and other buildings to house the flood of refugees and freed slaves pouring into Richmond. Officially known as the Bureau of Refugees, Freedmen, and Abandoned Lands, the Freedmen’s Bureau was a federal agency intended to assist freed slaves education and employment, among other duties.

Within two months of the fall of Richmond, the little wooden village on Chimborazo Hill also became home to a school for freed slaves, many of whom lived on the property. Although a primary school, it was not restricted to children. According to a school register, the students enrolled included teens and adults.

The youngest student was four year old Jimmie Allen, and the oldest was Harriet Brooks, twenty-six. The student body had a slight majority of female students.

Unlike some Freedmen’s Bureau schools, the Chimborazo School did not include Sunday school, industrial training or teach skills such as needlework, but rather concentrated on reading, writing and arithmetic. The school year began in October or November and ran until the end of June.

The Freedmen’s Bureau owned the building, but much of the support for the school came from Quaker societies such as the New York Friends’ Association, as well as other charitable societies.

The school was taught mainly by white Quaker women from the northeast, although by 1869, the school employed one African American teacher. One of these Quaker teachers, Mary Elizabeth “Bessie” Cartland, taught the school in 1868 and 1869. She kept a register for each school year, her neat handwriting recording the names and ages of her students, how many days they had attended, and whether any had been free before the war (none had). 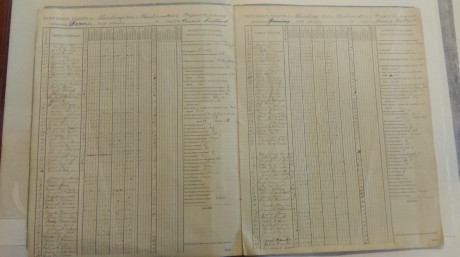 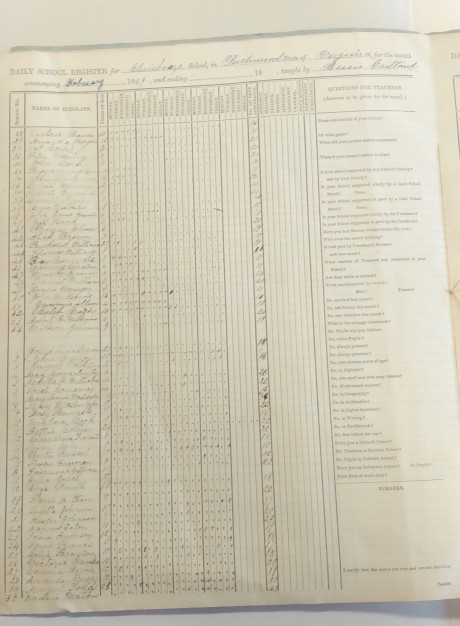 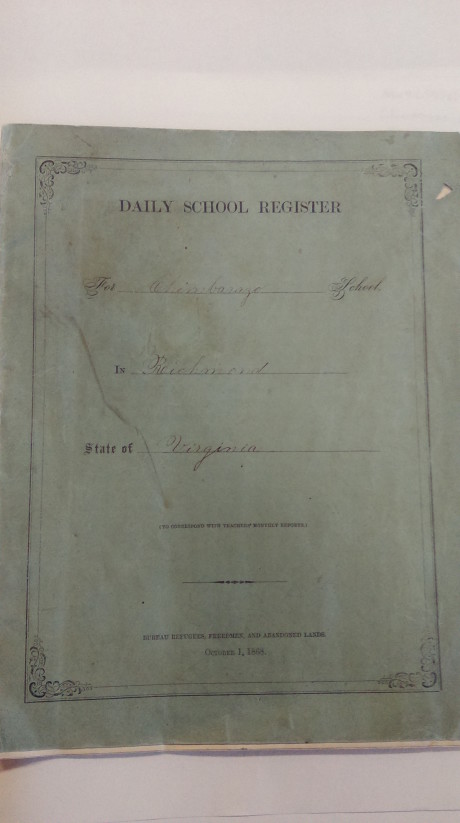 Cartland, who was the daughter of Moses Cartland, also a schoolteacher, was born in 1849 in Lee, New Hampshire. She was only nineteen when she began teaching at Chimborazo School. In 1868, she taught all 59 students by herself. In 1869, she was joined by another teacher, as the student population had risen to 76.

Although a large school for only two teachers, Chimborazo was the smallest Freedmen’s school in Richmond. Other schools in Navy Hill and Jackson Ward housed hundreds of students.

Sometime after 1869, the Freedmen’s Bureau school at Chimborazo closed its doors. This was likely due to the ratification of the new state constitution, which required a public school system for all Virginia children. In addition, the Freedmen’s Bureau, especially the schools, were sharply criticized by southern whites, and resistance to their efforts caused the Bureau to fold by 1872.

26th and Cedar, near where rooms were rented as a school

According to the Richmond Public Schools website, in 1869, rooms were rented near the intersection of North 26th Street and N Street (now Cedar) for the express purpose of educating African American children. In 1881, a new school building for black children was constructed nearby at the corner of 29th and O Street, which eventually became today’s George Mason Elementary School.

Bessie Cartland went back to New Hampshire to teach school. The wooden buildings at Chimborazo disintegrated, with many being carried off for firewood or building supplies, until nothing remained. One man was reportedly still living in one of the former hospital buildings as late as 1900, having moved it to the intersection of East Broad and Chimborazo Boulevard.

The areas around the hospital complex began to fill in with homes. The area was turned into a park by the city, and a Federal weather station was built on the site in 1909. The National Park Service acquired the property in 1959.