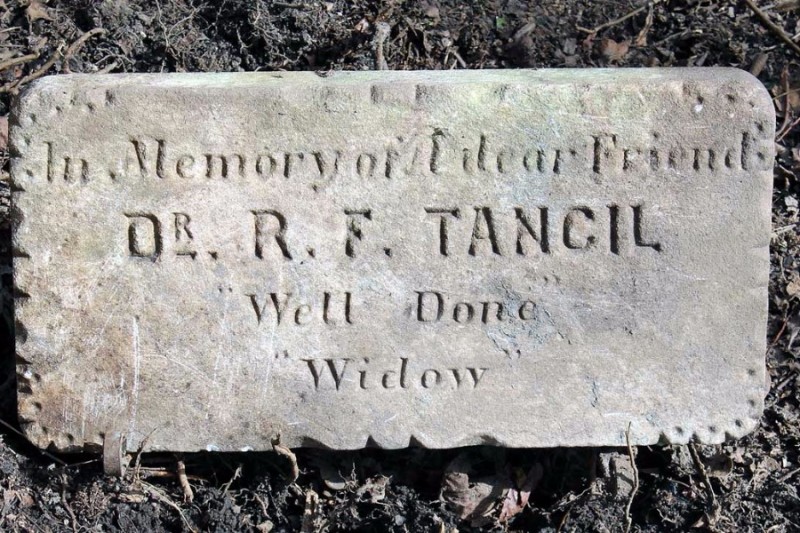 Can you help replace this stolen headstone?

John Shuck, the force behind the continued clean up at Evergreen and East End Cemeteries, has launched a $500 fundraiser towards replacing a headstone stolen last summer:

Many of you might remember that a headstone was stolen from East End Cemetery last summer. It happened to belong to one of our most prominent East Enders, Dr. Richard F. Tancil—a remarkable man who was born into slavery circa 1852, went on to earn his MD at Howard University, and set up a medical practice in Richmond’s Church Hill neighborhood, where he also founded a bank. According to his great-granddaughter-in-law, the family archivist, he was beloved by his wife, children, and grandchildren, who remembered him as funny, generous, and kind.

We are now raising money to replace Dr. Tancil’s headstone, which vanished from the family plot at the end of July 2015. We have a new stone, thanks to a generous donor, but will need to have it inscribed to match the original.

On Saturday, October 22, we will be hosting a dedication ceremony at East End to honor Dr. Tancil and his family, at least one of whom will be in attendance.

Our fund-raising goal is $500. Any money left over will go into our fledgling Adopt-a-Stone fund, which will help us pay to replace other missing or damaged headstones at the cemetery.

We would be deeply grateful for your contribution to this effort. Dr. Tancil is one of the great unsung leaders of Richmond, and your support will help preserve his memory.